Yunhwan Lee is a professor and Jinhee Kim is a research fellow in the Department of Preventive Medicine and Public Health of Ajou University School of Medicine, and the Institute on Aging of Ajou University Medical Center in the Republic of Korea. His paper was recently published in Age and Ageing journal. 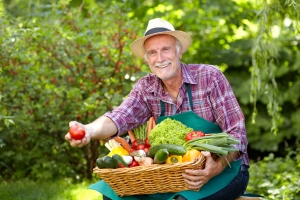 Sarcopenia, the gradual loss of muscle mass with age, is now widely recognised as a major health problem in late life. Older people with sarcopenia are prone to suffering from frailty, falls, and disability that negatively affects their quality of life. Because there is currently no effective treatment for sarcopenia, it is important to identify risk factors that have a modifiable influence on the condition.

There is growing evidence that healthy diet may have some benefits for sarcopenia. Previous studies, however, have tended to focus on identifying individual nutrients associated with sarcopenia. Little research has been done to examine the consumption of food groups and its association with sarcopenia. Among the food groups vegetables and fruit are rich in antioxidants, which have been considered as possible mediators against the loss of skeletal muscle. We therefore examined the association of fruit and vegetable consumption with sarcopenia in older adults living in the community.

Using a nationally representative dataset of about 2,000 men and women aged 65 years or older in Korea, we assessed the frequency of usual dietary intake of vegetables and fruits. The study subjects were categorized into quintiles based on the frequency of consumption, ranging from rarely to 3 times a day. Body composition was measured by DXA, with sarcopenia defined as appendicular lean mass adjusted for height and fat mass.

There was a significant trend toward a decreased likelihood of sarcopenia with increasing frequency of consumption of vegetables and fruits. Older men who were in the top quintile of vegetables, fruit, and both vegetable and fruit consumption were 52%, 70%, and 68%, respectively, less likely to have sarcopenia. In women, those who consumed fruit most often had a 61% reduced odds of sarcopenia.

These results indicate that older people who ate vegetables and fruit most frequently had substantially less sarcopenia than those who ate the least. Although these findings are from cross-sectional data and need further confirmation, this study is one of the first to suggest that modifying diet to include more vegetables and fruit could potentially lower the risk of sarcopenia.

You can read the full article here on the Age and Ageing journal website.