Dr Amit Arora is a consultant geriatrician at the University Hospital of North Midlands and has served as Chairman of England Council of the British Geriatrics Society. He and his team have developed the campaign “Sit up, Get Dressed, Keep Moving” which is being adopted in many NHS hospitals and abroad. 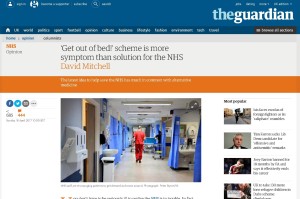 In David Mitchell’s recent article “‘Get Out of Bed!’ scheme is more symptom than solution for the NHS” which was published on the Guardian website he appreciates the simplicity and value of the campaign but questions whether the campaign is financially motivated.

I congratulate and thank Mitchell for raising awareness about benefits of early functional normalisation: “The Principle that people who have been hospitalized should re-start normal life as soon as they can is already well established”. He further writes that “it’s suspicious that a campaign exclusively pushing the idea of getting up and going home should coincide so precisely with the NHS’s dire shortage of money.”  I would like to detail how the campaign started and how it is free from any ‘spin’. END_OF_DOCUMENT_TOKEN_TO_BE_REPLACED