Zoe Wyrko is the BGS Director of Workforce Planning; she’s previously blogged about Frailsafe, the British Geriatrics Society project funded by the Health Foundation to improve the acute care of older people being admitted to hospital, and tweets @geri_baby.

Frailsafe is starting to happen! It’s been an exciting (and exhausting) week for the team, with the first learning session taking place over three days in Sheffield.

In addition to multidisciplinary teams from the 12 sites chosen to take the project forward, we have had stakeholder involvement with Tom Gentry from AgeUK, patient involvement with Olive and Ron who attended a couple of sessions on day 2, but more importantly an overwhelming sense of enthusiasm to make the Frailsafe checklist for admissions work. We’ve been immortalised in art by our illustrator, and we’ve been interviewed and filmed for a Frailsafe promotional video.

The learning environment has been truly multidisciplinary, (doctors, nurses, physiotherapists, OTs, pharmacists and hospital managers) and the team from Sheffield Microsystems Coaching Academy have been sharing their extensive skills and knowledge with us. Some of the concepts have been totally new, but in other areas I’ve been left thinking ‘Why on earth haven’t we been doing that already? It seems so logical.’ And I’m not the only one: another colleague is relieved because he now understands why his managers keep trying to make him do things with Post-it notes.

An element of cynicism is likely when doctors are presented with timetables which include a ‘paper aeroplane factory’ and ‘the marshmallow challenge,’ but with hindsight it is impossible to argue with the practical illustrations delivered by these training sessions. Why are we as clinicians so reluctant to adopt proven messages and systems learned by industry to improve quality and consistency? Even the ice-breaker – asking delegates to arrange themselves in a line according to distance travelled – was a lesson in systems and complexity. We have learnt about the psychology of improvement, how to understand and appreciate systems, and how even at a relatively basic level of knowledge we can improve the patient journey while bringing colleagues along with us.

We’ve also been able to speak about how Frailsafe got to where it is now; the reasoning behind the questions we chose for the checklist, and (probably more importantly) why certain areas are not included. The unveiling of Frailsafe version 8 was a big moment, and emphasised  the importance of having professional designers involved in a project such as this! 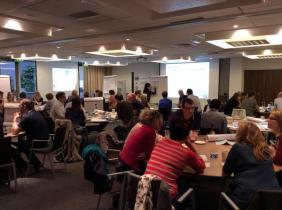 The final day of the session was used for planning, with  each hospital team working with the microsystems coach who will be supporting them closely throughout the Frailsafe project. The sites each left with an individual plan of how they will start to use the checklist immediately, using the mantra of ‘start small, get bigger,’ but, more importantly, reassurance and understanding of what to do if success isn’t immediate.

Our continued thanks go to the Frailsafe partners, especially The Health Foundation who have made this work possible. Please look at our website, as many of the learning materials will be available there soon.

And if anyone is interested – Glasgow and Craigavon jointly won the paper aeroplane factory, and Sandwell were the ‘Mr Potato Head’ champions!

Mary Cox, Safeguarding Advisor for Age UK will be speaking at the British Geriatrics Society Autumn conference in November 2013.  Her work involves helping older people, their family, carers, and professionals to prevent and stop abuse.  Her presentation will include narratives that demonstrate the dilemmas of speaking out about abuse and the impact harm has on people’s lives.

Adults suffer abuse when their human or civil rights are breached. The absolute human right ‘not to be tortured or treated in an inhuman or degrading way’ should be promoted by us all and be reflected in the quality of the services we provide.   It is Important that we enable people to have control over their own lives, treat them with dignity, support them to have the best physical and mental health possible, and facilitate their financial security. END_OF_DOCUMENT_TOKEN_TO_BE_REPLACED

Social media is the term used for online platforms which enable people to consume information as well as produce their own content – from 140 character updates on Twitter through to sharing photos on Instagram, and much more besides. Whether we use social networks or not, they are increasingly incorporated into day to day life, and not just for younger people:  Age UK report that the number of 55-64 year old internet users creating a social network profile rose by almost half last year, and many use social networking to keep in touch with family and friends and to reduce social isolation. END_OF_DOCUMENT_TOKEN_TO_BE_REPLACED