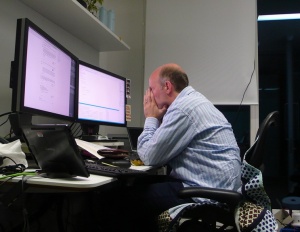 A study published today in Age & Ageing, the scientific journal of The British Geriatrics Society, found that businessmen who worked more than 50 hours per week and slept less than 47 hours per week in midlife had poorer scores for physical functioning, vitality and general health in older age, compared to those with normal work and sleep patterns. It also found that businessmen with long work hours but normal sleep patterns still had poorer scores for physical functioning in older age. Even taking into account midlife smoking, and other unrelated health issues, the negative effect upon physical functioning remained significant.

The study, which was conducted by researchers at The University of Jyväskylä in Finland, studied a homogenous group of 1,527 white men born between 1919 and 1934 who were a part of The Helsinki Businessmen Study. Working hours, sleep duration and self-reported health issues were surveyed among the businessmen and executives in 1974 and then surveyed again 26 years later. END_OF_DOCUMENT_TOKEN_TO_BE_REPLACED

Glenn Arendts is Associate Professor in Emergency Medicine at the University of Western Australia and Chair of the Geriatric Special Interest Group of the Australasian College for Emergency Medicine. He writes about his Age & Age paper.

Hobson’s Choice: A choice where there is really only one option
Morton’s fork: A choice between two equally unpleasant alternatives
Buridan’s Ass: A hungry donkey placed equal distance from two identical bales of hay cannot use reason to choose between them, and so dies of hunger

Take a straw poll of hospital emergency department (ED) staff and you will find majority support for the following statement: “too many people from nursing homes are sent to the ED”. That your poll results may say something about the views of some hospital staff toward nursing home (NH) residents is immaterial. Acute medical care of dependent people with life limiting illness is an area of legitimate concern, and the prevailing orthodoxy is that ED is a less than ideal place to deliver it. For decades, health services have invested in a variety of programs and interventions to reduce the transfer from NH to ED. END_OF_DOCUMENT_TOKEN_TO_BE_REPLACED

Kirsty Hendry is a research assistant based at Glasgow Royal Infirmary having recently completed her PhD at the University of Glasgow. In this blog she discusses her recent Age and Ageing paper looking at screening of delirium in older, acute care in-patients. Kirsty can be contacted at Kirsty.Hendry0@gmail.com

Delirium, suggested to be the most common psychiatric disorder suffered by older hospitalised individuals, has a low clinical awareness. This is despite existing guidelines such as those produced by the National Institute for Health and Care Excellence (NICE) and Healthcare Improvement Scotland (HIS) being in general agreement that delirium screening is important in older hospitalised patients.  END_OF_DOCUMENT_TOKEN_TO_BE_REPLACED

Dr. Fatou Farima Bagayogo is as a post-doctoral fellow who is currently interested in the organizational and professional factors that influence cancer care. This Fall, she is joining York University’s School of Health Policy and Management as an Assistant Professor in health management and global health. Some of her work is listed here. In her recent co-authored paper, she discusses creation in a hospital of a geriatric oncology clinic whose mandate is to facilitate the inclusion of geriatrics-based expertise in the care of older cancer patients.

Sixty percent of new cancers are diagnosed in patients older than 65 years of age. Given the vulnerabilities of older cancer patients, cancer specialists increasingly need the inclusion of some geriatric competence in managing these patients. Geriatricians can help them with a better assessment of a patient’s condition and a more adapted handling of these patients’ vulnerabilities. Considering the ageing of the population and the fact that cancer care will have to be increasingly adapted to the age group that will make the bulk of cancer patients, we studied whether or not this adaptation is taking place and the associated reasons. We tried to identify and explain the patterns of referrals from cancer specialists to a clinic staffed by geriatricians who are interested in being involved with older cancer patient care. END_OF_DOCUMENT_TOKEN_TO_BE_REPLACED

Integration of treatment and care from multiple disciplines is particularly critical in care for older people. Most older people admitted to a hospital suffer from more than just one (chronic) condition. As a consequence, coherent care for older patients involves more than just one discipline. Furthermore, the fact that patients are discharged from hospital quicker and sicker, with higher demands of care, increases the need for integration of (transitional) care between settings. Given the number of older adults who permanently lose the ability to perform one or more activities of daily living during and after a hospital admission, one has to conclude things need to be improved. However, it has proven challenging to accomplish improvements and maybe even harder to study (and to quantify) the benefits of the efforts taken. END_OF_DOCUMENT_TOKEN_TO_BE_REPLACED

Terry Quinn is the joint Stroke Association & Chief Scientist Office Senior Clinical Lecturer based in the Institute of Cardiovascular and Medical Sciences, University of Glasgow. In this blog Terry discusses his recent Age and Ageing paper looking at anticoagulants (blood thinners) and dementia. He tweets @DrTerryQuinn

Despite decades of research, an effective treatment to prevent or delay dementia remains elusive. This is in stark contrast to cardiovascular disease, where we have many evidence based treatments in the therapeutic toolbox.  Certain cardiac diseases seem to be associated with cognitive decline and this begs the question, could cardiovascular medications prevent dementia?

We decided to look at a particularly common cardiac condition, atrial fibrillation (AF, an irregular heart beat). People with AF are at risk of stroke, a risk that can be substantially reduced with anticoagulant medication.  END_OF_DOCUMENT_TOKEN_TO_BE_REPLACED

Najma Siddiqi is a Clinical Senior Lecturer in Psychiatry who works at the University of York & Hull York Medical School; and Bradford District Care NHS Foundation Trust. She discusses her Age & Ageing paper ‘The PiTSTOP study: a feasibility cluster randomized trial of delirium prevention in care homes for older people’.

Delirium (often called ‘Acute Confusional State’) is a common and serious illness among older people. It can be very distressing for patients, their families, and for healthcare staff; and can lead to worsening dementia, hospitalisation and death.

There is relatively little research on delirium in general, but this is particularly true of delirium in the care home setting. END_OF_DOCUMENT_TOKEN_TO_BE_REPLACED

Research published today in Age & Ageing, the scientific journal of The British Geriatrics Society, reveals that retirement promotes enjoyment of everyday activities and general well-being. The study examined participants’ enjoyment of activities such as going to the gym or reading a magazine, as they transitioned from work into retirement. Retirees reported that they actually got greater enjoyment from doing the same things they did before retirement. END_OF_DOCUMENT_TOKEN_TO_BE_REPLACED 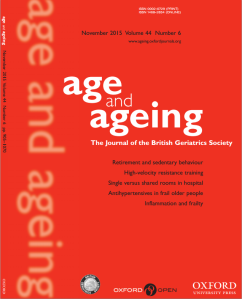 Claudia Cooper is a senior lecturer at University College London, specialising in older people with dementia and mental health issues, and an honorary consultant old age psychiatrist with Camden and Islington NHS Foundation Trust. In this blog, she discusses her recent Age & Ageing paper on dementia and socioeconomic deprivation.

Over 800,000 people in the UK have dementia and numbers are growing as people live longer. There is no cure but drug treatments can help, for example by slowing memory loss among some people. The UK National Dementia Strategies made fair access to these treatments a priority.  We wanted to find out how likely it is that people living with dementia get these drugs.

END_OF_DOCUMENT_TOKEN_TO_BE_REPLACED

Rachel Buckley is an Alzheimer’s Australia Postdoctoral Fellow, in the Melbourne School of Psychological Sciences at the University of Melbourne. Her study on mild cognitive impairment is published in the current issue of Age & Ageing. She tweets at @bucklr01

It is very common and quite normal to forget where you left your glasses. Although this might happen to you with relative and increasing frequency, concerns of this nature do not necessarily signal the starting point of a dementia. It is no secret that when it comes to your perceptions of yourself, an outsider’s perspective – particularly from someone who knows you well -can be very informative. When considering your concerns of your own forgetfulness, this is particularly the case.