Dr. Susan Freter is an Associate Professor of Medicine at Dalhousie University, and a staff geriatrician at the Nova Scotia Health Authority in Halifax, Canada.  She has a special interest in delirium prevention and management in orthopaedic patients. 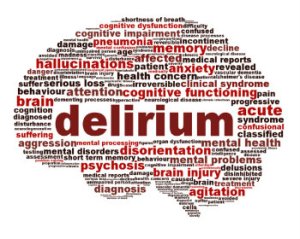 Geriatricians talk a lot about post-operative delirium.  It is common after surgeries, especially in people with a lot of risk factors (or we could say, especially in the presence of frailty), and even with recovery it makes for a bad experience.  The occurrence of hip fracture, which mostly befalls patients who are older and frail, demonstrates this routinely.  We know that taking extra care with at-risk patients can help to prevent delirium.  Taking extra care can manifest in different forms: educating the caregivers, paying attention to hydration (is the patient actually drinking the cup of water that is plonked down in front of them?), paying attention to constipation (preferably before a week has gone by), making sure hearing aids are in the ears, and using medication doses that are geared for frailty, rather than for strapping 20 year olds. But how can what we talk about be translated into what we do? Does the ‘doing’ actually work in practice?

By necessity, research involves research personnel.  That works, until you’re trying to apply what’s found to a clinical setting that doesn’t have extra personnel available to do extra things, like reorienting people, putting in their hearing aids, or soothing them instead of giving them a sleeping pill.  Even frailty-oriented medication reviews don’t happen unless a geriatrician has been consulted, which in many places only happens in a fraction of hip fracture patients, and usually only after the delirium is well entrenched.  Any sustainable plan has to involve actual frontline staff.  What about educating them about delirium and delirium prevention?  Good idea, but it doesn’t have an effect that lasts.

Post-operative care on orthopaedic units is largely dictated by the post-operative orders, and typically via standing orders. We thought that tinkering with the pre-printed standing orders might be the most feasible way to impact delirium prevention in a sustainable way.  So we made the pre-printed orders (PPOs) for hip fracture patients “delirium friendly”, and gave them to hip fracture patients on one orthopaedic unit (144 patients), leaving the usual PPOs on the other orthopaedic unit (139 patients). This pseudo-randomization is bound to annoy “evidence checklist” people, until they realize that it was meant to counter an even greater threat to validity called “contamination bias”, which means that when a person knows what the best thing to do is, they typically feel obliged to do it for everyone.

Making the post-op orders “delirium friendly” means paying extra attention to frail patients, in the hope that many small changes will have a noticeable effect on delirium prevention.  We made acetaminophen (paracetamol) dosing regularly scheduled and reduced the available dosages of as-needed opioids.  Benzodiazepines were not available for sleep (unless the patient had been on them at home); instead, trazodone was available if needed.  We took dimenhydrinate out completely, allowing a motility agent (domperidone) if nausea was an issue.  Urinary catheters were all removed by post-op day 2, with an expectation that post-void residuals would be checked.  Laxatives were scheduled, rather than on-demand, to avoid running into constipation.  We couldn’t think of an easy way to encourage hydration, so added electrolytes, urea and creatinine levels to the mandated blood testing, to help the team identify dehydration earlier rather than later. Knowing that we couldn’t hope to prevent all post-operative delirium, we also put in an order for low doses of haloperidol for severe agitation, if necessary. The rest of the postoperative care stayed the same.

As we had hoped, compliance with the delirium friendly PPOs was excellent, as they were delivered by regular orthopaedic ward nurses following the doctors’ orders in the chart. This had a significant effect, with 51% of patients who were managed with the usual PPOs developing delirium, compared to 33% of patients with delirium-friendly PPOs.  And the percent improvement was greatest in a particularly at-risk group, people with dementia.

Our study shows that paying extra attention to frail older patients helps to prevent delirium.  One way to translate from talk to action is to translate delirium-friendly principles onto routine postoperative orders.

2 thoughts on “We talk a lot about delirium after hip fracture, but what can we do about it?”