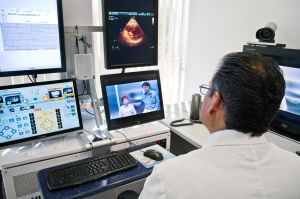 We are facing unprecedented times in the NHS. Those of us working from within, we know only too well that the demands and pressures mean we need to do things differently, in a cost efficient way, while safeguarding quality and standards of patient care. Digital technology has been heralded as the panacea for our situation, with telecare, telemedicine and telehealth offering viable alternatives to our reduced staffing, and pressured workloads. Digital is non judgmental and non discriminatory.

But is it accessible enough to be a truly viable option for our older patients? The Digital Britain Government report in June 2009 promised an ‘analysis of our communications infrastructure capabilities, an identification of the gaps and recommendations on how to fill them. I wonder how far we have got with that?

The NHS 5 Year Forwards View has  ‘embedding digital’ as one of its top priorities, and Martha Lane Fox identified four priority areas in her report  to the  Minister of Health  in December 2015.

2. Free wifi in every NHS building

4. 10% of registered patients in each GP using a digital service booking appointment

Our patients clearly must be some of the furthest! Interestingly there are some great examples of care for people with learning difficulties and mental health issues, but nothing morphing to the needs of older people specifically has been showcased, that I am aware of. Are those of us involved in older people’s care Luddites? I think not, but the complexity and the individuality of our patients plays out in the digital world, and we are more likely to be paralysed into inaction. We can’t meet all of the needs for all of the patient population all of the time, than be brave, and have a go at developing something for the small group of ipad accessing eighty year olds we support. Age UK’s report ‘Technology and older people – evidence review’ suggests that older people who have access to the internet are more likely to use it than those of  any other age groups. Age UK have an annual digital champion award for those who encourage older people in the use of technology for their own benefit.

There are some good practice examples about care ‘around’ older people, like the Airdale care homes work, but not many initiated and lead with older people themselves.

The NHS IT interoperability has been described as ‘digital spaghetti’ by NHS England lead, Helen Rowntree. So the complexity of the system is understood. Are older peoples’ advocates involved in the Digital Roadmap work- the growing frailty agenda would seem ripe for such innovation? Or are we still designing systems in our ‘gangs’?  Neil Mortimer from West Midlands Academic Health Science Network (WMAHSN) described the NHS as looking like a whale, but in fact being a shoal of individual fish who may or may not be heading in the same direction! This exacerbates the challenge of sharing good digital solutions. Again, the frailty agenda, with a desire to identify potential homeostatic crises before they occur, and reduce that risk must pose an opportunity to develop some digital options. The Genie Programme is maybe the start- but are clinicians brave enough to endorse it?

This blog was prompted after attending an Openforum event on digital healthcare.