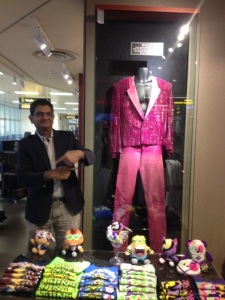 Dr Simon Conroy is a geriatrician at University Hospitals of Leicester, Honorary Senior Lecturer, University of Leicester and an Associate Editor for Age and Ageing journal.

Have you ever been to Malta? It’s a beautiful country with a warm Mediterranean climate and an enthusiastic team of clinicians engaged in improving the care of frail older people.

Along with Professor Tash Masud from Nottingham, I was privileged to be invited to speak at their inaugural geriatric medicine conference in May 2015.

For a first meeting, there was an impressive turnout of around 400 people, including all clinical disciplines, but importantly students enthused about the speciality, and commissioners and policy makers. It bodes well for the future of geriatric medicine in Malta, which at present has 11 geriatricians for a population of just over 400,000, of whom about one-quarter will be older people by 2060. Malta also has one of the highest dependency ratios in Europe.

Although geriatric medicine is still developing in Malta, the country has a proud heritage of advocacy for ageing as a global health challenge, namely:

Malta has an incredibly diverse ethnic heritage, with strong influences from the Romans, the Moors, Italy, France, Britain and North Africa. This melting pot makes for a fascinating culture that is well worth a visit if you get a chance! Of course there is the strong influence of the Knights of the Order of St John, which is essential reading if you are not already familiar with the story.

Having seen the scientific and clinical quality that the Maltese are producing, we were positive about the care of frail older people in Malta. There is a lot of work to do still, as most geriatric medicine is still practised in a separate geriatric, but there is already a  well-established orthogeriatric service, and plans afoot to inveigle CGA into mainstream clinical care in the acute hospital.

If there are geriatricians out there with a fancy for travel, you could do much worse than visiting Malta and seeing how you can help out with their service developments.

And as for Elvis – as the above photo shows, we found him modelling at Malta airport, just outside the Hard Rock café!