Dr. Oksuzyan is Post-doctoral research fellow at the Institute of Public Health, University of Southern Denmark.

Dr. Jeune is Associate Professor of Epidemiology, University of Southern Denmark and Director of the Graduate School of Public Health.

Prof. Christensen is the Director of the Danish Twin Registry and the Danish Aging Research Center University of Southern Denmark and Senior Research Scientist at the Terry Sanford Institute, Duke University, USA. 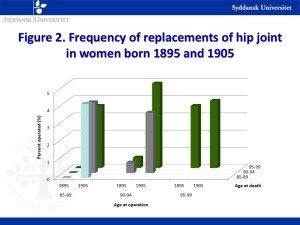 Are older people admitted to hospitals and receiving surgical treatments more often than people of the same age did a decade ago? To answer this question, our research group compared the percentage of hospitalized people and individuals treated surgically from ages 85 to 99 years who were born in Denmark in 1895 and 1905. Those born in 1895 were followed from 1980 to 1994, whilst individuals born in 1905 were followed from 1990 to 2004. The study was based on Danish register data which is a unique data source for scientific research as it covers the entire Danish population.

We found that the proportion of hospitalized people and the proportion of individuals treated surgically were higher and the length of hospital stay was shorter in the generation of older people born in 1905 than in the generation born in 1895 at all ages from 85 to 99 years. Figures 1 and 2 show a remarkable increase in primary replacements of hip joint not only from one group to the other, but even within the group born in the 1895: no patient was operated at ages 85-89 years, but 2.2 – 3.6% persons were operated at ages 95-99 years. These findings point toward provision of more treatment to older people in hospitals and reduced age inequality for surgical treatment in the Danish healthcare system in recent years.

There are a few explanations for these findings. Improved health of recent generations of older people  [1, 2] and development of better anaesthetic and surgical procedures made it possible to perform more operations on older people. Reorganization of the Danish healthcare system, e.g. an increased number of general physicians and specialists who follow up on patients after discharge from the hospital, as well as improved homecare and institutional care provided by the Danish municipalities may enable earlier discharge from hospital and shorten length of hospital stay [3].

A number of reports have shown that in developed countries older people are the fastest growing population segment [4-8], and researchers predict number older people as a proportion of the total population will grow further [7]. Therefore, the major question that concerns lay people, medical communities, and insurance companies (in countries where these are involved in healthcare delivery) is whether treating very old people more actively is beneficial? Our study showed that despite an increased percentage of hospitalizations and surgical procedures, the proportion of older people dying in hospital and the proportion of dying after surgery at the same age were similar in both cohorts studied.

So, the good news appears to be that medical professionals are able to select patients who are eligible to undergo a surgical treatment and benefit from it, based on their health status and safety of surgical procedures rather than on their chronological age.